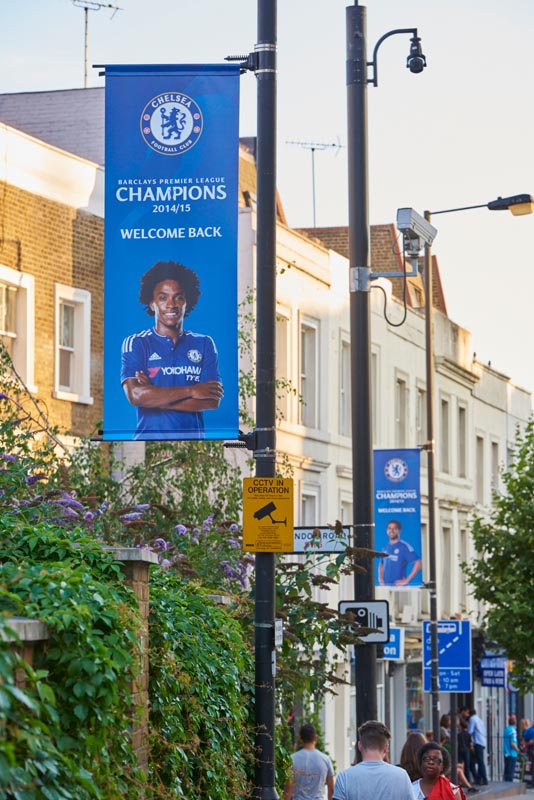 It’s that time of the year again, football season begins and months of match-watching and Fantasy Football lie ahead of us. Over the years, Bay Media have been the Street Dressing® partners for clubs and stadiums across the UK. This month, we have had a series of exciting campaigns go live across the country with each campaign carrying its own story and delivering a strong message to the fanatical football faithful.

Manchester United and Adidas staged a full takeover of the areas surrounding the Theatre of Dreams – Old Trafford – for the kick off of the 2015/2016 Premier League opening game of the season. This two week, intensive Raised Lamppost Banner campaign was used to help launch Adidas as Manchester United’s latest shirt sponsor. The streets around Old Trafford were lined with 76 banners carrying the message “Break Expectations #bethedifference”. The campaign dominated the OOH space ensuring that all 75,261 supporters in attendance on match day felt pride in their team and a part of something special. The campaign delivered 1,498,000 motor vehicles impacts during the two weeks the campaign was live. In South West London, on one of the UK’s most prestigious roads, Chelsea FC, welcomed their fans back for the first home game of the season with a Raised Lamppost Banner campaign around Stamford Bridge. This was a venue approach package and the campaign showcased a number of the starting 11 players accompanied by welcoming messages for the fans. The objective of the Raised Lamppost Banner campaign for Chelsea FC was to invoke a positive response from the fans on game day so that the crowd felt welcomed and appreciated and ready to support their team over the course of the coming season. The positioning of the banners was key for this campaign as they were installed outside the ground where they stood out above the crowds and created a positive impact in the area during the lead up to the first home game of the season. A recent campaign booked with Southampton FC aimed to build a stronger rapport with their fan base. The club wanted the community to be proud of their recent success and were so keen to integrate the community into the campaign that they decided on a user generated content (UGC) concept, asking supporters to submit their feelings on why they are proud of their club and used these quotes as text for the banners. They went for area domination, utilising 25 sites along 3 different routes. These red and white banners displayed the club emblem and shared with onlookers the sentiments of pride and excitement in the fans. The roads were carefully selected to ensure optimum impact, targeting areas with the most footfall. It was a truly personalised campaign and one that made the supporters feel involved with the success of the club. With outdoor advertising campaigns for sports clubs and venues, the aim is to instil a sense of pride in the local area as well as promoting the teams involved and guiding match goers to the venue via venue approach packages. By choosing a Bay Media Raised Lamppost Banner campaign, those key messages are positioned on the streets amidst the crowds, touching both hearts and minds on those memorable games of the season.

The Raised Lamppost Banners create a welcoming atmosphere to those who have travelled to the games and cultivate pride in the local community. They are the only OOH media that can deliver multiple impacts, over an extended dwell time, on nearly all routes to the stadium. This media is positioned in front of the fans, allowing the clubs to give back to their fans, on their streets in the very heart of the community.