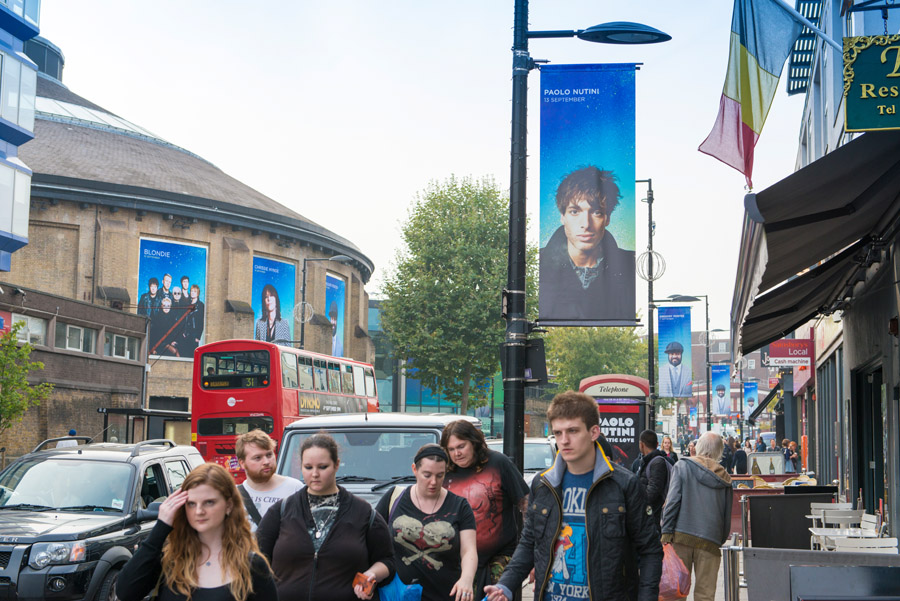 June is here and the streets are starting to come alive as the Fairs, Fetes and Festivals calendar unfolds. This is a busy time for street dressing and we work closely with councils and clients to ensure events and businesses have optimum exposure during the (hopefully!) dry and sunny days and the long, bright evenings.

This runs at the end of the summer and is a free music festival at the Roundhouse in Camden. It’s a worldwide event and iTunes Festival performances are streamed on iTunes and Apple TV. Bay Media provide the street-dressing for the event and blanket the streets of Camden in colourful raised lamppost banners to generate excitement and promote the festival. The raised lamppost banners are in close proximity to the venue and guide the target audience right to the doors. This is England’s biggest curated mixed arts festival and attracts some of the most innovative artists and adventurous audiences from around the world. Raised lamppost banners are part of the buzz of the festival and promote the event to visitors, covering key venue approach locations such as Brighton Train Station – in the image shown – and reaching areas of high footfall. A pop-up beach scene in the middle of buzzing Camden Town, bringing the seaside to the city with end-of-pier amusements, seasonal food and drinks and beach huts to hang out in. Bay Media help to promote the event by lining the streets with seaside-themed raised lamppost banners along all the main footfall routes ensuring that visitors to the area know that the event is on and denoting The Roundhouse as the venue. Held on leafy Clapham Common, this is a key summer event for the area and the raised lamppost banners line the streets surrounding the park to promote the various musical acts and generate excitement amongst locals and those visiting. Strategically placed, they impact those approaching on all key routes and also dress the roads around the Common creating a Festival feel. This family-friendly event runs in August and takes place in the summery, seaside location of Southsea. Set against blue skies, the raised lamppost banners highlight the holiday feel of the festival and rally up pride and excitement in the locals as well as creating a feel-good atmosphere for all those who attend over the weekend. We did a video on last year’s event – click here to check it out! As well as these regular summer events, Bay Media has also worked on several high profile sporting events over the last few summers, dressing the streets of London for the Olympic Games in 2012 and taking a similar raised lamppost banner campaign to Glasgow in 2014 for the Commonwealth Games. These were celebratory events putting both cities under a worldwide spotlight and Bay Media were proud to line the streets with specially designed raised lamppost banners for the events and key sponsors of each event, bringing a sense of national pride and excitement for what was to come to the cities. We look forward to what Summer 2015 holds!